Mistledale is set in the Forgotten Realms, the same setting used for the official Neverwinter Nights campaigns as well as famous games such as Baldur's Gate and Icewind Dale.

Your adventures take place in Mistledale and the surrounding areas, in the Western Heartlands region of the continent of Faerûn. Mistleldale is one of the Dalelands, a series of small countries in a loose alliance, which surround  the ancient forest of Cormanthor.

A time of danger

Mistledale has traditionally been known as a quiet, orderly land of sturdy farmers and good rulers.

But that was in the past. Now, Mistledale is under threat, and requires the help of heroes more than ever before.

To the east lies the forest of Cormanthor, largely abandoned since its Elven inhabitants fled Faerûn in what became known as The Retreat. The forest is not safe, as remnants of the Army of Darkness - demons and other infernal creatures that waged war against the Elves - still remain there. Nonetheless, adventurers have been known to venture into the forest, seeking treasure or knowledge hidden in the ruins of the ancient Elven kingdom.

Now, however, new inhabitants have laid claim to the forest. The fearsome Drow, pale-skinned elves with evil in their hearts, have abandoned their underground homes and seek to build a kingdom of their own in Cormanthor. And they have begun a murderous campaign of terror against the surrounding Dales and their inhabitants.

North of Mistledale is Shadowdale, traditionally home to some of the mightiest heroes of Faerûn. Today, Shadowdale is fighting a war against the Zhentarim, an army from the Moonsea Coast dedicated to the worship of the evil god Bane. The Zhentarim launched a surprise attack which succeeded in murdering or gravely injuring Shadowdale's heroes before they had a chance to respond.

Shadowdale is burning and while the other Dales have come to its aid, it is a war that they are losing.

To the west lies the unnatural desert of Anauroch, once home to the Netherese Empire, a land of powerful wizards. Tragedy befell the Netherese and their fertile home became a desert of sand, rock and ice.

Mistledale is separated from Anauroch by the Thunder Peaks, mountains inhabited by orcs, giants and more. But something has happened in that desert, and there have been reports of creatures from the Thunder Peaks fleeing eastwards, into the Dalelands. 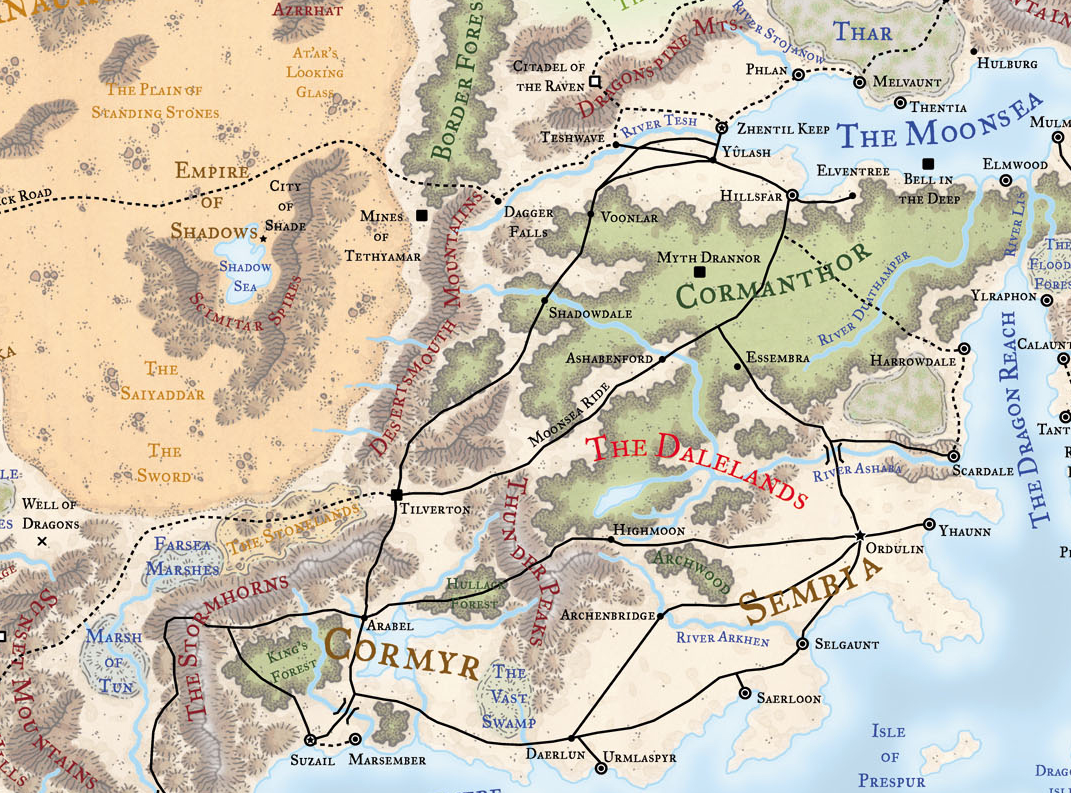 South of Mistledale is Cormyr, one of the oldest and most powerful kingdoms in Faerûn. Cormyr has stood for more than 1,000 years, and its elite warriors, the Purple Dragon Knights, are respected across the continent.

Cormyr is recovering from an attempted invasion by goblin hordes, which was defeated - but at the cost of the life of its king, Azoun Obarskyr IV, who was slain on the battlefield. With his heir but an infant, the nobles of Cormyr embarked on a bloody civil war.

The nation's young ruler, Princess Alusair Obarskyr, is attempting to restore stability until her nephew, the new king, is old enough to govern. Known as the Steel Regent, she is highly capable. The fact remains that Cormyr, in its current weakened state, must put its own interests first.

Southeast of Mistledale is Sembia, a young and ambitious nation formed by merchants. Dedicated to trade, Sembia is certainly keen to expand its influence in the Heartlands. Perhaps it could come to Mistledale's aid? But you can be sure that Sembia would want something in return.

A note for fans of the Forgotten Realms

The Forgotten Realms have changed over time. Mistledale uses the 3E and 3.5E version of the realms.